A group of Durham College students from the Event Planning program submitted a proposal to the Professional Convention Management Association (PCMA) North American Student Challenge and took home first place! The students were tasked with planning an event focused on combatting human trafficking. With the endless options of venues to be selected within the country, the students chose the Shaw Centre to host their event.

Emily Last, Michelle Corradetti, Naomi Brock, Nicole Rayment and Ryan Windsor – all second-year event planning students at the time developed a 45-page proposal shared on an international stage. It was Durham College’s first year participating in the competition and the only Canadian school to submit a proposal. Among those proposals were 12 other schools, with 21 submissions to beat. We had the opportunity to interview Emily Last, Michelle Corradetti, and Nicole Rayment to learn more about their winning proposal and why they chose the Shaw Centre as their venue.

“We chose the Shaw Centre because of its location; we figured we would be the only group competing in this North American challenge. As well, we wanted to highlight Canada and the nation’s capital. Many people assumed we would have chosen Toronto, but there are existing events that pertain to human trafficking, so from an awareness perspective, we wanted to educate other Canadian cities, including Ottawa.” Michelle Cordetti shares that they also chose the Shaw Centre because of its high-end reputation. “The entire centre is glass, and since our event name was Shining a Light on Human Trafficking, with all the natural light within the Shaw Centre, it just seemed like the perfect setting. It’s also located close to an international airport and other amenities. There are so many options for transportation and it’s attached to a hotel, so it was perfect for anyone who needed accommodations.”

As for attendance, the team anticipated over 800 attendees for particular sessions. Michelle Cordetti notes the Shaw Centre was a fitting due to its extensive meeting space options. “We didn’t want our attendees going into the same room of rounds; we want it to be different and engaging with different styles of setups, classroom and theatre, for example. The Shaw Centre allowed flexibility with the space that was available. Plus, the views from the Trillium Ballroom are stunning, so we thought it was the perfect setting for our closing gala.” 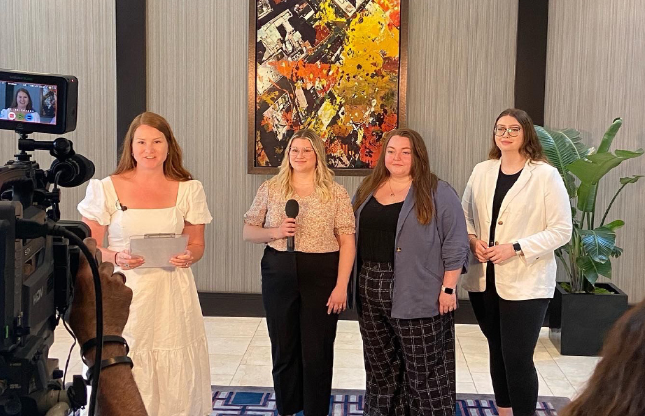 The conference was proposed as a one-day event, when asked if the event could have been more than one day, team member Emily Last notes, “When we look back on our research, we noticed there wasn’t even a lot of single day events, when it came to human trafficking within the events industry. With our event objectives, education, awareness, and fundraising, there are endless opportunities. Human trafficking in the events industry is an important topic, so many aspects can be covered. We struggled to keep it a one-day event because of all our ideas. It could have been a three-day conference with thousands of people, which would expand the reach so much more in our communities to bring awareness.”

We also discussed the theme and what they learned during their research. “Combatting human trafficking in the events tourism and hospitality industry is a large problem that is not widely discussed enough. Especially in other cities and other places within Canada and North America. I think that PCMA wanted to shed light, which is why our proposal is called “Bringing to Light” such a dark issue that needs to be discussed more, and people need to be more educated on it.” Says Nicole Rayment. “Simply put, the theme was chosen to make everyone more aware of their surroundings and react better to situations that involve human trafficking.”

Originally this was just a school project; submitting the proposal was optional. However, after realizing the effort they put forth and the quality of their work, they decided to submit their proposal with one goal: to win! The experience turned quickly from a school project to a winning proposal. “It progressed into this amazing opportunity for us all to build connections and to be able to establish ourselves as industry professionals and to have the opportunity to hone in on our skills was incredible.” Emily Last shares. “The experience of becoming more educated on human trafficking allowed us to take what we have researched and learned from this proposal and apply it to our everyday lives as we are all event professionals now working in the industry.”

The Shaw Centre congratulates the students on their achievements and thanks them for choosing our venue to host an important topic that affects our industry every day. To view the student’s winning proposal, click here.